Palm Bay Heights is one of the 5 districts in Paradise City. This district includes Big Surf Beach, and is the area that was displayed in the Burnout Paradise Demo along with a portion of the I-88 freeway. Palm Bay is mostly a commercial area with the exception of the Country Club. Big Surf Beach and numerous Ramps and Billboards make the district an excellent Stunt Run location.

The list below describes many locations in-game that aren't always accessible, they provide Palm Bay Height's inhabitants with a variety of goods and services. Most of them (generally the most visible ones) are shown here so players can easily spot where they are and how far they are from the nearest shortcut or junction, without looking at the map.

Westernmost sub-district, it is built in the hills and features a Hollywood-like Paradise City sign.

This is the northernmost sub-district which is home to Big Surf Beach. It is built on the coastline.

The central sub-district directly north of Downtown Paradise. The Twin Bridges in question are the parallel bridges that are part of 7th Street. Historically the name was probably given when both bridges were built at the same time, or simply because they are parallel and identical to one another.

The second central sub-district. It is best known for the Palm Bay Junkyard and accessible West Acres Parking Garage along Hamilton Avenue.

"Last but not least (as I don't stray too far from the posh end of town) is the place where I like to go at the weekend, the Disco on Hamilton. All the fabulous celebs go there, and the parking lot makes an excellent place to hide or use as a shortcut. Of course I wouldn't know first hand, I don't hang around in parking lots behind nightclubs..." 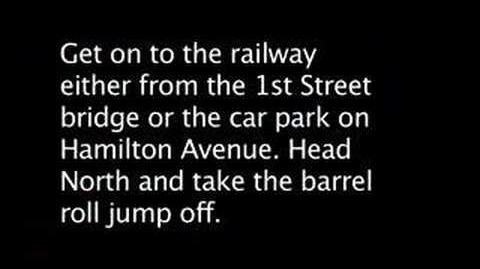 Add a photo to this gallery

Retrieved from "https://burnout.fandom.com/wiki/Palm_Bay_Heights_(Burnout_Paradise)?oldid=83094"
Community content is available under CC-BY-SA unless otherwise noted.