View source
watch 01:36
We're Getting Mutants in the MCU - The Loop
Do you like this video?
Play Sound

Burnout Paradise is set in a fictional city called Paradise City, located somewhere on the eastern coast of the United States. The player can freely drive around the city and engage an Event at any traffic signal. As with the previous games in the Burnout Series, there is varied terrain in Paradise City ranging from downtown streets to mountains. However, this is all contained within one open area that players can drive freely in. Paradise City is divided into 5 districts, which make up two general areas of the landscape, the urban area and the rural area. Downtown Paradise, Harbor Town, and Palm Bay Heights make up the urban area, while Silver Lake and White Mountain make up the more rural area. These districts are further divided into sub-districts, each with a slightly different design sense, from abandoned warehouses to beachfront hotels.

In the Big Surf Island Update, an Island of the same name was added off of the East coast of Paradise City, expanding Paradise's driving terrain and adding a new district and five new sub-districts. When taking into account the island, the original area of Paradise is commonly referred to as the mainland.

Paradise City has an area of 26 square miles, and approximately 218 miles of drivable road. This does not include Big Surf Island. The area has many landmarks for the player to explore, discover and use, such as a major highway (I-88), which provides a handy way to cross large areas of the city. I-88 is one of the ways the player can access the country area, the others being West Crawford Drive and Lawrence Road in the North and the South Bay Expressway Suspension Bridge in the South. In Downtown Paradise, Webster Avenue is one of the main routes, with the freeway directly below. In the western side of the city, Nelson Way is a common thoroughfare which extends around Silver Lake and White Mountain. South Mountain Drive is also a long route which outreaches to the West and winds up the mountains. One of the more gameplay-centric features of the city is the use of finishing landmarks for the mainland Race, Marked Man, Burning Route, Burning Ride and Midnight Ride events.

There is one landmark for each point of the compass: 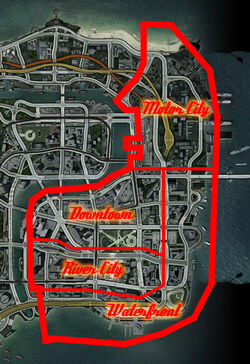 Motor City (a Downtown Paradise sub-district) is the initial starting area for players when they start the game. The northern section is more of a warehouse area with a lighthouse, while the southern is a business area containing the skyscrapers that can be seen from Palm Bay, Harbor Town, and Big Surf Island. It is the only region in the game to contain three finishing landmarks, The Coastguard HQ, Waterfront Plaza and the Wildcats Baseball Stadium. 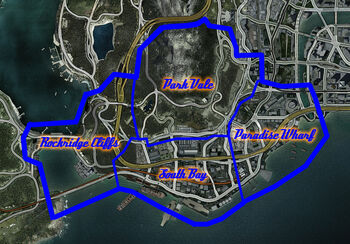 Harbor Town is an industrial area of Paradise City, especially in the Southern edge. The West area of this region contains the Rockridge Dam and the South Bay Expressway Suspension Bridge, two ways to get into the country area. Harbor Town's finishing landmark is the Naval Yard, which also serves as the base for the Robbers team in the Cops and Robbers online game mode. 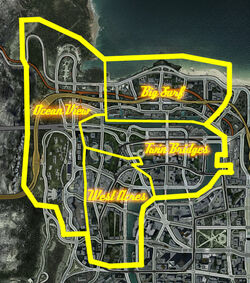 Palm Bay Heights is the more "relaxed" end of the city, containing shops and hotels, as well as some small residential areas. The Southern area also contains some small high-rise buildings. Palm Bay's Landmark is the Maplemount Country Club, which doubles as the base for the Cops in Cops and Robbers. Major landmarks include Big Surf Beach with complimentary Ferris Wheel, the Lawrence Road tunnel, which heads into the country area, and the large Paradise City sign on the Western Hills, which is visible even from Paradise Keys Bridge on Big Surf Island. This hill obscures any view of the main city from the country area. 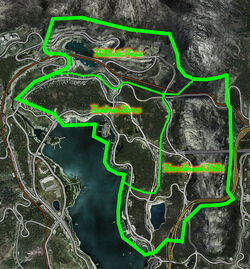 Silver Lake represents the Eastern portion of the country area, and the only region without a finishing landmark. Silver Lake is also the name of the lake in the center of the country area, next to which lies a hidden abandoned Airfield. Other landmarks include the Dead Man's Edge jump with its own restaurant, and a small island resort and beachfront in the Northern portion of the lake. Also, there is a secret ramp off of W.Crawford Drive that gives you access to N. Rouse Drive right above the tunnel in Heartbreak Hills. 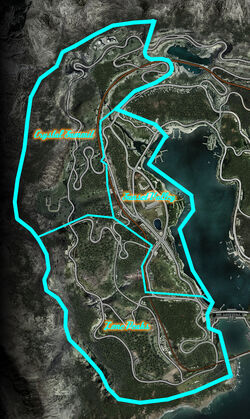 White Mountain is the Western end of the country area, and contains the Lone Stallion Ranch, Wind Farm, and Observatory finishing landmarks. Like Silver Lake, it has a much lower density than that of the main city as this does not have as many intersections or as much traffic as the city. Notable landmarks include an abandoned quarry, a Figure 8 Stock Car Racing Track in the south, and Sunset Valley Town with its own Tennis Stadium. Also included in this area is the Rockridge Dam Super Jump, which is the largest (measured by height) in the original game (excluding Big Surf Island).

There is also a hidden road for those who want to discover as much as they can so stay aware of a red sign north from Dead Mans Edge! 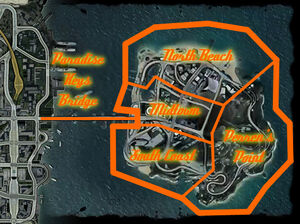 Big Surf Island is the name of the collective sub-districts on Paradise City's east coast. Being a vacation spot, it has a much more tropical, holiday getaway feel than the mainland, with Palm Trees and many Hotels. Like the mainland, it is also split into an urban and a rural area. It contains many jumps that are much larger than those elsewhere in Paradise City, including the famous Crash TV Ski Jump and Perren's Point Lighthouse Jump. Major landmarks include Taylor Jay Towers, the Inspiral Car Park, two construction sites in the city and outskirts, a marina, and large beach area.

An early concept of Paradise City. 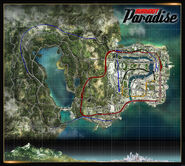 The Paradise City map before the Big Surf Island Update.

A full map of the Paradise City regions along with their sub-districts.
Community content is available under CC-BY-SA unless otherwise noted.
Advertisement