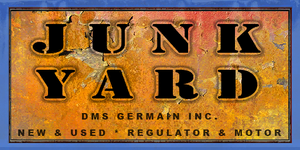 Junkyards are the most important Drive Throughs in Burnout Paradise. Once entered they give the player access to his vehicle collection where they can then select a vehicle to drive as well as their vehicle's paint job.

The game itself starts in the East Crawford Junkyard where the player is given their first car: the Hunter Cavalry. Each time the player unlocks a new vehicle by either upgrading their License, Shutting Down a rival, finding all of a type of Discovery or as a Burning Route reward; the gained car is shipped to the Junkyard in a wrecked state. Also note when the player has won a new vehicle, upon entering the junkyard a camera will zoom in on a flashing sign stating,"New Wrecks Here."

Players must note that there is one Junkyard per district which comes to a total of 5 Junkyards on Mainland Paradise City and 1 on Big Surf Island. The player's whole vehicle collection is available from each of them.

Players have to repair their car before they can apply a new paint job, whether going back to the Junkyard or going to a Paintshop.

Driving through a Junkyard in reverse, during an event or whilst in a menu does nothing and the player will continue on without entering the Junkyard.

The Free February Update added a vehicle filter to Junkyards. Players can now find the vehicle they want quicker by browsing through Downloadable Content Pack.

The first Junkyard the player is introduced to and incidentally the first sight of Paradise City is located in Motor City in Downtown Paradise. It is built along East Crawford Drive directly east of the Section 2 of the Interstate-88.

The Coastguard HQ, the Motor City Auto Repair and the Downtown Paradise Perfect Cover Paintshop can be seen near this Junkyard. Players are be able to access a shortcut running through a few shipping containers leading to the northbound lane of the I-88. This shortcut's entrance is placed directly south of the Junkyard's entrance.

Big Surf Beach and 2 Car Parks; the Big Surf Garage to the West and the Motor City Garage to the South can be found to the North of the Junkyard.

The Palm Bay Heights Junkyard is located in a Discovery dense area of Paradise City along Hamilton Avenue opposite the West Acres Gas 5 station. The El-Train Tracks pass overhead and the West Acres Yellow Sign Car Park is built just North of the Junkyard along the same road.

Landmarks can be found dotted around the Junkyard such as the Memorial Triangle, The Eagle Monument and Dokjor's Disco to the South.

The Harbor Town Junkyard can be found tucked deep in the industrial district of Harbor Town's South Bay at Manners & South Rouse under Section 4 of the I-88. It is the only Junkyard to feature a sloped entrance passage so speeding from the South into the Yard can prove hazardous.

Landmarks such as the Nakamura Car Plant along Lambert Parkway as well as the Railroad passing south of the Junkyard over South Rouse Drive can be found in the area. The Naval Yard is located South-East of the Junkyard.

The Silver Lake Yard is a much larger and complex Junkyard which sits at Nelson and Ross. It is located East of the Lawrence Road tunnel making it easily accessible from Paradise City.

Other Drive Throughs in the area include the Eastern Shore Auto Repair shop along Nelson Way adjacent the Silver Lake Ranger HQ and the Eastern Shore gas station along East Lake Drive south-west from the Junkyard.

Landmarks surrounding the Yard such as the Eastern Shore Airfield is next to the Junkyard and its entrance is just a few hundred yards south along Nelson Way, the aforementioned Ranger HQ and the Silver Lake watercourse.

The huge body of water which gives its name to the district also includes the accessible Silver Lake Island which features several Discoveries such as Smash Gates, a Super Jump and a Billboard.

The western-most Junkyard in Paradise City is built along Hans Way between Chubb Lane and West Lake Drive.

The nearest Drive Through to this Yard is the Southern Sunset Valley body shop on Chubb Lane. More of these buildings are located farther away in Sunset Valley Town. Gas 5's Lone Peaks station is located along South Mountain Drive near the Lone Peaks Stock Car Track.

There are many sights and locations in the rural area in which this Junkyard is placed such as the gigantic Lone Peaks Quarry which is adjacent to the Junkyard. Sunset Valley Town is to the North and the massive Rockridge Dam is to the East.

The newly introduced Junkyard to Paradise City is Big Surf Island's Junkyard in the South Coast sub-district built along Grange Hill. It is similar to other mainland Junkyards except it sports a "24 Hour Service" sign. The Junkyard's motto is "Everything in Automotive" which indicates that the establishment focuses on general vehicle mechanics unlike the mainland Junkyards which are simply "Wrecking Scrap."

This Junkyard is adjacent to warehouses and the total area occupied by the Drive Through is larger than that of other Yards.

Nearby Drive Throughs include the Midtown Gas 5 station and the North Beach Auto Repair body shop.

Big Surf Island has much to offer for sightseers and many of these places aren't too far from the Island's Junkyard. The most important areas around the Yard is the towering Ski Jump and the large Construction Site to the West.