The Jansen P12 88 Special is a Legendary Car available in Burnout Paradise from the Burnout Store and is an upgraded version of the P12. The 1.70 Update added a new Legendary Cars section to the Garage where players can view cars such as the 88 Special. To actually use it, players have to purchase it from the Burnout Store, PlayStation Store or Xbox Live Marketplace. In Burnout Paradise Remastered, the car is bundled free of charge and is unlocked from the beginning.

The 88 Special is quite unique, as when the Boost is ignited, the tires will leave behind long flame trails. Additionally, clicking

or the P key activates 'Hover Mode', which retracts the wheels into the car and allows it to hover a short distance off of the ground.

Many parts located at the rear are exposed, but from the front it looks like a standard P12 with a brushed finish and pipes around the front. The 88 Special can also be painted in any color available in the game, but the brushed steel finish itself cannot be altered.

As far as performance goes, the 88 Special lives up to the original P12's nickname of "Pocket Rocket". It is a quick, nimble ride that takes turns well. In Hover Mode, the car turns a bit wider than normal, but it isn't affected by different surfaces such as sand and dirt. During a crash, the car will always switch back to 'Road Mode'.

While in Road Mode, the 88 Special has a softer suspension than the original P12. This is probably due to it being older than the other P12s. Another possible reason is because of the added weight the car has from the special engine on its rear. When turning without drifting, the car can be seen leaning outwards against the direction of the turn, much like the Hunter Takedown 4x4. This is most noticeable at higher speeds when trying to drift using the brakes. The 88 Special will lean out of the drift, but if using the E-brake, the car's suspension will stay very flat, making it much more easier to control around turns.

If in Hover Mode, the 88 Special will lean into corners. This can make the car very maneuverable around traffic and excellent when performing takedowns. Its acceleration from a dead stop in Hover Mode, however, is mediocre. It is recommended to accelerate in Road Mode first, before switching to Hover Mode when speed is achieved. This is the fastest way to get to top speed whilst boosting. The E-brake can feel a bit floaty and unresponsive in Hover Mode, so it is best to use the E-brake style of drifting a few meters prior to the actual turn or corner entry.

The 88's details are surprisingly accurate to the one from Back to the Future. The radiator exhausts, much of the piping, the wires on the side and the beams on the front and back of the car are all recreated. The main car itself even has modified windows to appear similar to that of a DeLorean. There is even a warning sign on the back referring to the plutonium needed to power the car in the first film. There is no flux capacitor, time circuit dashboard or Mr. Fusion fitted on the 88 Special, and the rear vents are also completely different, appearing thin and louvered instead of tall and segmented.

The 88 Special blazing through the streets of Downtown Paradise.

The 88 Special performing a barrel roll.

The 88 Special can drive faster while hovering. 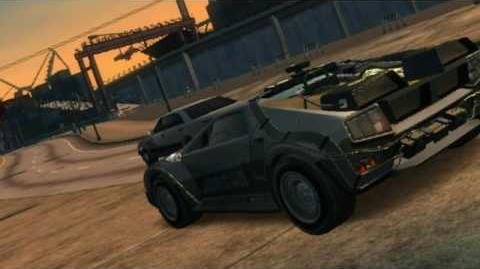 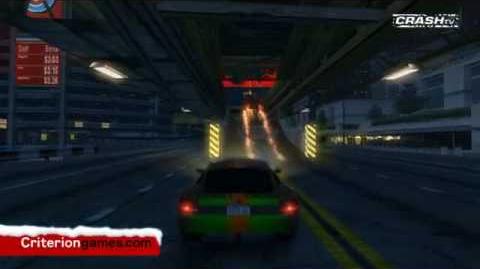 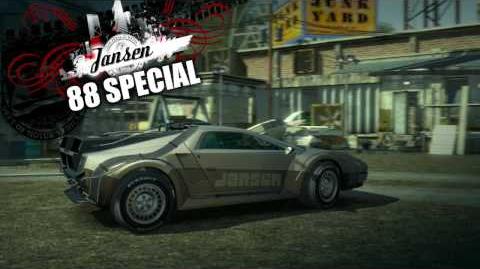