The Free February Update is the sixth update to Burnout Paradise following its announcement on Criterion Games' website on January 16, 2009, and was released on February 6, 2009 as a free downloadable update.

It introduced the ability for players to restart events, added visual changes, some event tweaks, changes to vehicle dynamics, an in-game store, and an in-game website.

The Junkyard now allows players to choose vehicles from different categories such as Paradise Cars, Paradise Bikes and Online Cars.

The first few cars in Paradise have been changed to make the game more accessible to casual players. This has been done by making the earlier vehicles harder to crash, easier to steer and less likely to spin out.

Barrel Rolls will automatically right themselves. Players can steer into the roll bypassing the auto correction to allow for more than one barrel roll by pushing the left stick in the direction of the spin. Releasing the stick or pushing it in the opposite direction will allow the vehicle to correct itself and land properly. 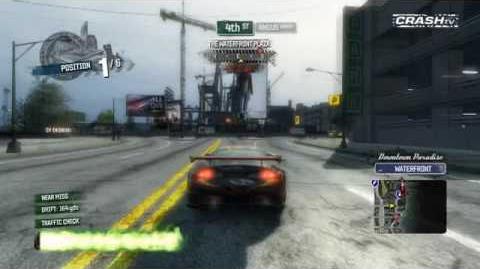 Retrieved from "https://burnout.fandom.com/wiki/Free_February_Update?oldid=84805"
Community content is available under CC-BY-SA unless otherwise noted.