The new generation of American muscle cars is here, and they've finally put the MUSCLE back in. What's more, it might even make it round the occasional corner.

The Carson GT Concept is a muscle type vehicle equipped with Stunt boost. It is quite possibly the most well rounded car in Burnout Paradise. It shares common performance traits with the Montgomery Hawker. Its speed and boost statistics are very good although its strength statistic leaves something to be desired.

Its maneuverability is also sufficient for Races and Road Rages but Stunt Run is what this car is built for. It isn't the best car for any one event type. Its high statistics make it good for Race events, its strength is decent enough to survive a Road Rage or a Marked Man and it can pull off a lot of stunts as well as multipliers for a decent score in Stunt Run.

Awarded for obtaining your Burnout License.

The GT Concept resembles the Chevrolet Camaro. The center stripe design is also like a Camaro's although the side stripes are similar to the second generation Shelby Mustang. Also, its tires resemble that of a mid-2000s Mustang GT. 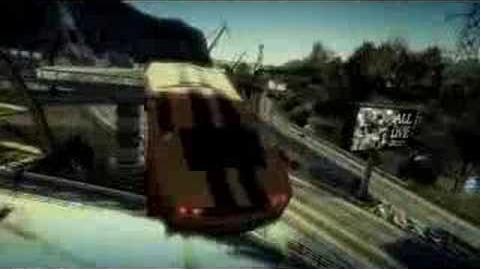 A screenshot after the GT Concept is awarded to players.

Have you ever seen...